If you are into having all kinds of “bells and whistles” in your aircraft like lights, navigation tools, radios, and an electric starter, then you probably have an electrical system installed! Today, you will rarely find an aircraft without a full electrical system setup, and some of them are rather complicated.

Small airplanes are usually powered by a 14-volt or 28-volt DC (Direct Current) electrical system. This system also provides and maintains a charge for 12-volt or 24-volt flooded or wet cell batteries (sometimes NiCd or Li-Ion).

Alternators (or generators in older systems) provide the electrical current for your bus bars, lights, electronic controls, and also charge your battery. Your battery helps with starting your engine and acts as a backup source in the event of alternator or generator failure.

Following are the components of the aircraft’s electrical system (and I will discuss some of them in detail below):

Some of the uses of DC electrical system include, but are not limited to:

Here is a nice video on the aircraft electrical system overview:

I will divide this article into the following sections:

The transformation of mechanical energy into electrical is done by two similar systems called a DC alternator or a DC generator. This transformation process is called electromagnetic induction.

Generators are more common for older aircraft. Both systems produce Direct Current (DC) and are designed to power aircraft’s electrical loads. Charging the aircraft’s battery is also done by either one of them.

DC alternator and DC generator are usually engine-driven systems that have the ability to generate electricity. They start by producing a current, which is constantly changing its value and polarity (also known as an Alternating Current or AC) and transforming it into a current that flows in a single direction (also known as a Direct Current or DC): 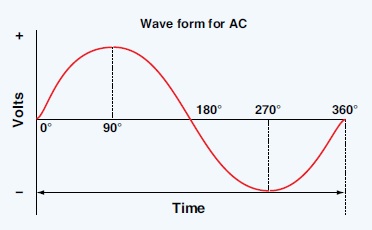 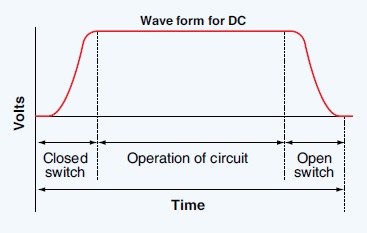 Components of a typical 24-volt aircraft DC generator include: 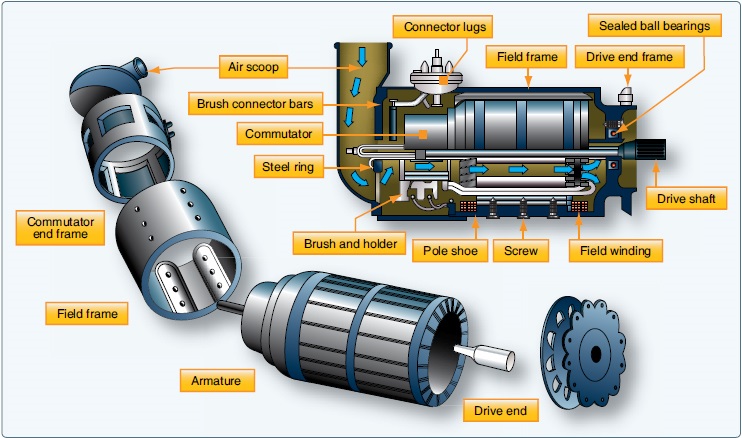 The basic generator system produces AC (or Alternating Current) that needs to be converted into DC (or Direct Current) to be compatible with your airplane’s DC loads. It does so by using a modified slip ring arrangement (also known as commutator):

This system of rings allows the transformation of AC current into 14-volt or 28-volt DC. Even though DC generators in most aircraft are replaced by DC alternators, some older and lighter aircraft are still powered by generators.

DC alternators are generally lighter than DC generators and are commonly found in modern, piston-engine aircraft. Another main advantage of an alternator over a generator is that it is able to produce a sufficient amount of power even at lower engine RPM.

DC alternator consists of an armature winding to produce AC current and a rectifier to convert it into Direct Current (or DC): 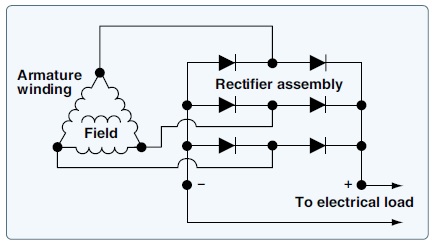 These waves are then converted to DC (or Direct Current) by a rectifier system consisting of diodes. As you see, even though DC alternators and DC generators basically serve the same purpose, their working principle is entirely different!

The alternator or generator circuit is turned ON by the Master Switch: 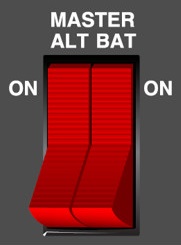 There is also a control unit (also known as a voltage regulator) that regulates the charging voltage that the alternator or generator produces. It looks like this: 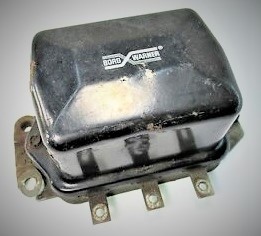 Here is a simple diagram of the Generator Control Circuit: 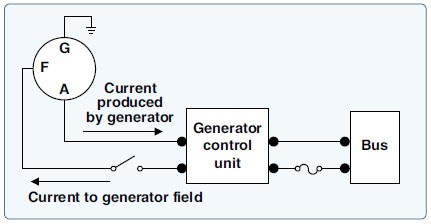 And another one of the Alternator Control Circuit: 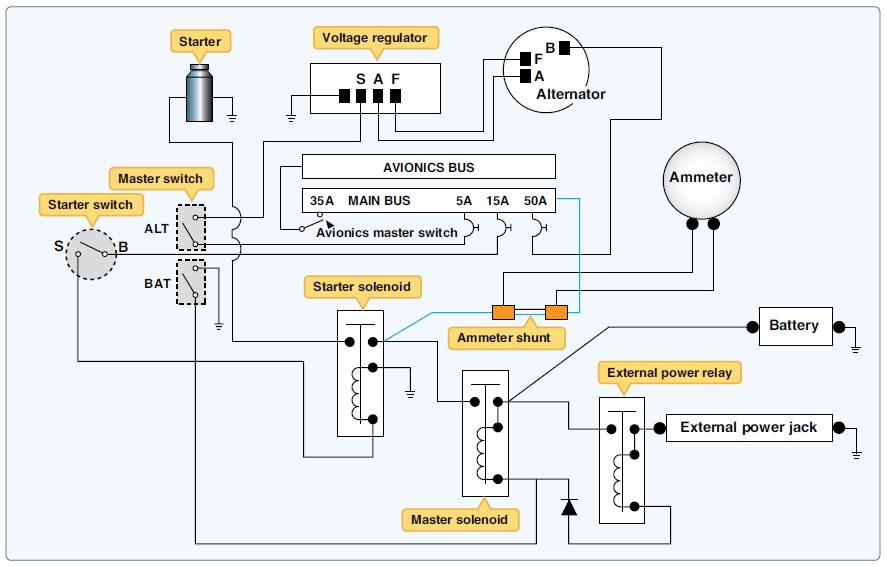 In most aircraft, you will find an ammeter to monitor output. It measures the flow of energy from the alternator to the bus. Here is a simple diagram: 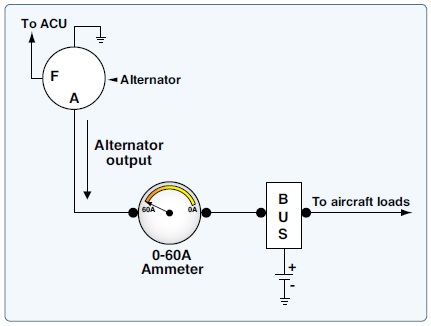 The second most important component of the aircraft’s electrical system is a battery. The battery in aircraft is used to provide a startup energy boost for the engine and as a secondary power source in the event of generator or alternator failure.

Since the battery capacity is limited, you should always be checking your gauges to make sure it is being charged by your alternator or generator. Aircraft batteries come in three main chemical variations:

The battery capacity is measured in Amp Hours or one-hour capacity. If you have two 12-volt (24-volts combined) 200AH (400AH in total) batteries (that your aircraft system expects), this means that you can use:

That is if you discharge it fully, which is NOT recommended! Regular Lead Acid batteries should be discharged no more than 50% and Deep Cycle – about 80%.

Charging of the battery is done by an alternator or generator system. Batteries should NOT be discharged MORE than the manufacturer’s recommendation and NOT undercharged as well.

Undercharging and overcharging batteries will shorten their lifespan and efficiency (there are many tools available to avoid this problem). This is why you need to make sure that your batteries have a full charge in them before taking off.

Batteries get connected to an electrical distribution bus through the solenoid. It’s a device similar to a relay, only it controls high current circuits (while relay controls low current circuits).

When Master Switch (for the battery) is flipped, the solenoid activates the battery circuit. Here is a diagram: 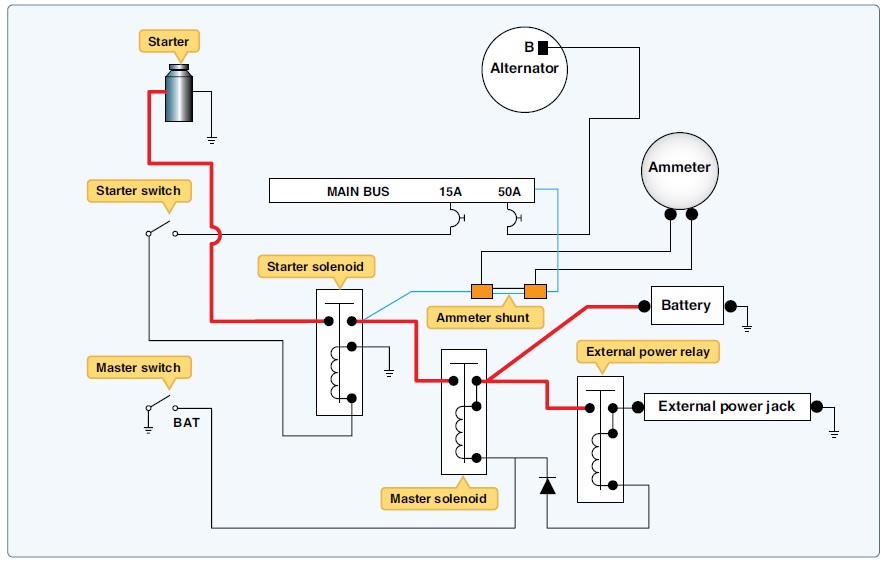 The main purpose of the airplane electrical system is to generate power, distribute power, and store it in case of an emergency. Here is an overview of the power distribution system:

The components of the aircraft’s electrical system are divided into multiple buses. The most common types of buses are:

Electrical Bus (or Bus Bar) is a common wire which connects multiple electrical components like lights, radio, etc., into one circuit, and uses its own circuit breaker to control energy flow. It works in a way similar to a power strip that we have in our house.

After the engine has started and the alternator (or generator) kicked in, you need to turn Avionics Master Switch ON: 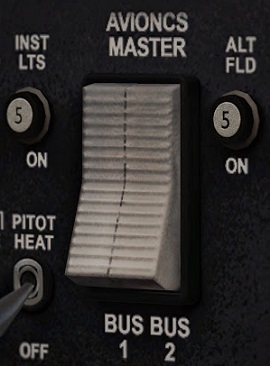 This switch powers electronic devices located on your dashboard and protects your sensitive equipment from being damaged by excessive voltage flow during startup.

Here is a complete diagram of how bus bars are connected in your aircraft: 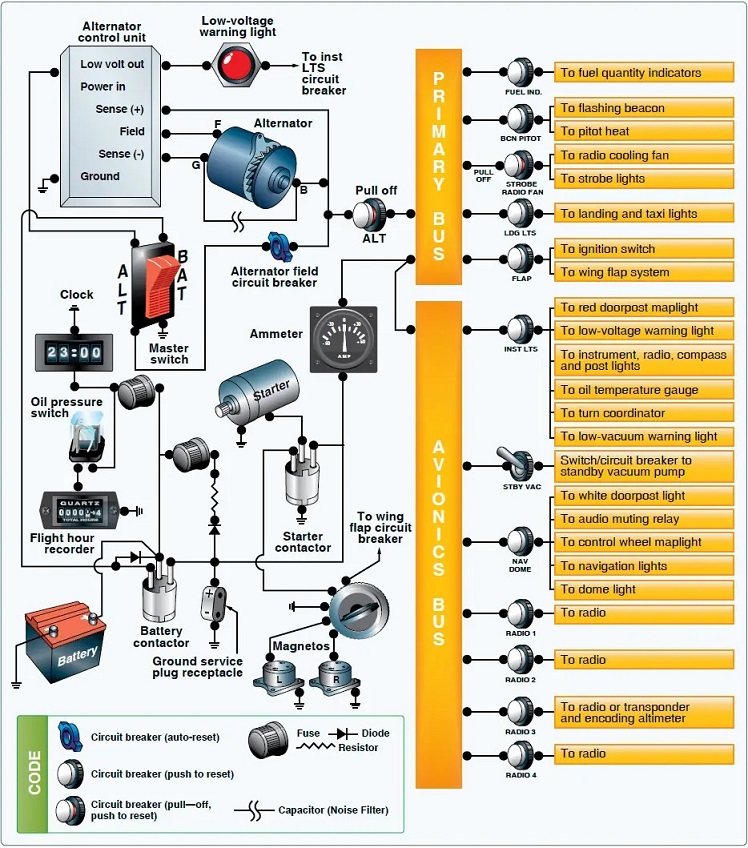 Before power gets to your actual device from a bus bar, it needs to pass through a circuit breaker for protection. Circuit breakers are more commonly used than fuses due to the complications which come with changing them.

Some older aircraft models still use fuses. Every circuit breaker is marked with a number related to how many amps it will let your equipment use before breaking the connection:

If the electrical component is starting to pull more current than the AMP rating of the circuit breaker, the breaker will pop and open a circuit.  The circuit will pop and disconnect your equipment also when an electrical fault is detected.

The most common faults that trigger the disconnection of the electrical circuit, are:

This is why at the beginning of every flight:

You should always check your circuit breakers

The whole purpose behind having a circuit breaker or a fuse is NOT to allow excessive current to get to your electronic devices. When one of your circuit breakers pops, the main rule is:

NOT to reset it twice!

Why? Because THERE IS A REASON behind the popped circuit and it should be taken care of before further damage is done.

The popped breaker could mean anything from:

All the way to:

Someone before you used circuit breaker as a switch

In the last case, everything should be fine and it is a rather common situation when you turn things OFF by popping a circuit breaker. You reset it and it stays this way (nothing is being damaged).

In the first case, if the switch pops RIGHT BACK, do NOT attempt to do anything until professional checks your equipment! That includes force-pushing your circuit breaker!

** Warning! Even though it seems logical, holding your circuit breaker in the connected position will NOT solve your problem! Pushing the wrong voltage through an electrical system can overheat your wires and cause a fire!

An ammeter is an electronic device that lets you monitor the performance of the aircraft’s electrical system: 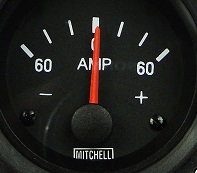 The loadmeter shows the load that is being placed on the alternator, with zero being NO load (meaning failed or disconnected alternator) and numbers being actual indicators in amps:

** Reference. Diagrams in this article are taken from this resource (check them out!)

Find a professional airplane service near your location:

Attention! This article is for informational purposes ONLY and is NOT a replacement for professional advice! ALWAYS consult your local specialist for an appropriate solution to your problem. All statements, prices, contact information, recommendations, and reviews contained herein came from sources that we believe to be reliable, but the accuracy or completeness thereof is not guaranteed. Please contact the service provider for complete details and updates. 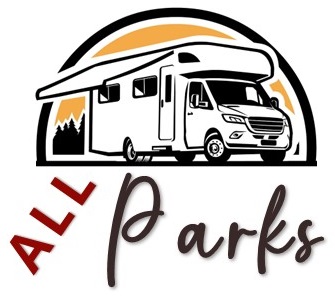 We use cookies on our website to give you the most relevant experience by remembering your preferences and repeat visits. By clicking “Accept All”, you consent to the use of ALL the cookies. However, you may visit "Cookie Settings" to provide a controlled consent.
Cookie SettingsAccept All
Manage consent

This website uses cookies to improve your experience while you navigate through the website. Out of these, the cookies that are categorized as necessary are stored on your browser as they are essential for the working of basic functionalities of the website. We also use third-party cookies that help us analyze and understand how you use this website. These cookies will be stored in your browser only with your consent. You also have the option to opt-out of these cookies. But opting out of some of these cookies may affect your browsing experience.
Necessary Always Enabled
Necessary cookies are absolutely essential for the website to function properly. These cookies ensure basic functionalities and security features of the website, anonymously.
Functional
Functional cookies help to perform certain functionalities like sharing the content of the website on social media platforms, collect feedbacks, and other third-party features.
Performance
Performance cookies are used to understand and analyze the key performance indexes of the website which helps in delivering a better user experience for the visitors.
Analytics
Analytical cookies are used to understand how visitors interact with the website. These cookies help provide information on metrics the number of visitors, bounce rate, traffic source, etc.
Advertisement
Advertisement cookies are used to provide visitors with relevant ads and marketing campaigns. These cookies track visitors across websites and collect information to provide customized ads.
Others
Other uncategorized cookies are those that are being analyzed and have not been classified into a category as yet.
SAVE & ACCEPT
Hit Counter
wp stats